I came up with Begriddled between December 2018, when I started looking at possibilities of connecting characters in different ways to reveal a hidden design, and 21 February 2019 when the light finally dawned that I could construct logic puzzles that work with the two simple rules I’d established by then.

Two years later, on 12 May 2021 I confirmed to myself I could eliminate one of the two rules at the expense of slightly further limiting the shapes that can be hidden in the puzzles. And so was born the new Begriddled!

Something new rarely comes out of a vacuum and this is no exception.

Somewhere about the middle of 2018 I had been playing with the idea of paint-your-own mugs.

That thought had sprung from an earlier one, but unless you stop going back through the “one thing leading to another” thing at some point, you eventually get back to looking up at clouds going by from a pram. Who wants that?

So let’s say it sprung from thinking about doing paint-your-own mugs.

That led to me thinking about doing “secret messages on a mug.” (It didn’t have to be a mug. It could also be a tea towel. Or anything really. But mugs are easy things to paint on.)

First I played with shapes that looked like nothing in particular until you coloured them in as instructed. It sort of worked, as long as you could fit your message into about four characters.

Then, after some time trying hexagons with no great success, I thought I had it when I tried colouring in a grid of squares according to a character within each cell.

There are 52 upper and lower case letters plus all the other things like numbers and that squiggle character that only nerds like me know the name of. So even after weeding out visually ambiguous ones you are still left with enough to encode more than enough. Top right above the diagonal blue, below it red. That type of thing.

I was able to construct a complete (English) alphabet and a selection of punctuation made up of these encoded squares.

But though it was fun for a bit, and you could get a fair few more characters on a mug than with the earlier idea, it somehow didn’t hit the spot.

I wondered about joining together points at the corners of squares in a simple grid pattern using some simple rule, and tried a few things that I couldn’t make work very well.

When I tried simply putting numbers at those corner points and joining adjacent numbers that were the same or differed by one (looping back round from 9 to 0) it was frustrating to find it almost worked. Almost is no good.

At last, rules that work

I quickly found it was impossible to construct some shapes with those rules, and introduced other characters to fix that.

But it was becoming messy and I decided to work within the restrictions of the two simple rules: numbers that are the same join horizontally and vertically; numbers that differ by one (and 9 back to 0) join diagonally too.

I was surprised at how few impossible-to-construct shapes I could come up with, but remained pretty sure I needed something for situations where it all works except for points where every number results in unwanted lines.

For that I was torn between using an x or a space. I didn’t want to use a dot – I reserved that as the one special character. A dot means a dot, and it’s so obvious when you see it that it doesn’t even need a rule.

But again I found that if I threw away the idea of a special character to mean “no line,” I could nearly always get rid of the need of one by fiddling around with surrounding numbers. I’ve notionally kept that rule – missing number means no line. But it’s so dissatisfying that so far I haven’t succumbed to its allure and probably now never will.

And so gestation came to an end and a puzzle was born.

Babies tend not to pop out with a name tag, and neither did this.

It’s hard to name something, especially when you want it to be new, somehow fitting, short enough to use in a domain name, and for the dot com to actually be available. But name it I eventually did.

I think the name Begriddled does work.

It’s a sort of riddle in a grid, if you like, and whatever the numbers are hiding has been, well, begriddled!

And it’s quite short.

And the dot com was available.

Other than countless experiments, my very first complete Begriddled puzzle was a 2019 Valentine’s day mug for my wife, handed over early out of impatience to see how well it really worked in someone else’s hands. 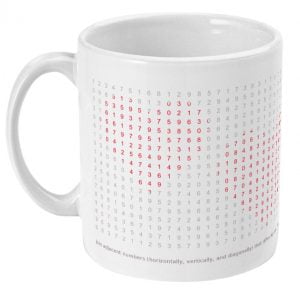 The text was sparse because I still found it hard to position shapes right next to each other without hours of trial and error to get rid of spurious lines.

It was also before the logic version was conceived.

Not a glint in the eye yet, let alone born.

But eventually some idle brain cell decided it was about time it made a contribution and in one of those moments in life where you feel triumphant and a bit stupid at the same time (how on earth could someone be playing with this for weeks on end without the possibility of something like that even crossing their mind?) the realisation finally dawned.

So after experiments in the previous couple of days or so to see how practical it might be to “decrypt” a text design without first knowing what numbers join to what, the logic version of Begriddled was finally born on 21 February 2019.

Over two years later I had just contacted a number of local magazines with a view to them publishing a regular word-finder Begriddled puzzle.

Having sent just a handful of letters it hit me that it appeared it might just be possible to do away with the rule about joining identical pairs of numbers for this particular puzzle variation. I expected it would be too limiting to be useful.

24 hours later, on 12 May 2021 I had confirmed it worked. I failed to find an example of this particular type of puzzle that I could make with the existing two rules but not with the single rule.

This goes right back to one of the first things I tried with a grid of numbers back in 2018 but which I decided couldn’t work at the time. (It was all pencil and paper back then, and without the experience I have now, I failed to get anywhere with it. It looked like it wouldn’t be possible to do anything meaningful, until I came up with the second rule, the one I’ve now been able to ditch.)

It won’t work for everything (eg my small lower case character set) but it absolutely does work for my 3 by 3 capital letter character set, and puzzles built using them.

So the new reduced instruction set version of Begriddled was born with just its single rule – join adjacent numbers/characters in the grid that are next to each other in the circular sequence.

Adjacent numbers that are the same and under the (until then) existing rules are treated differently depending whether they are adjacent diagonally (not joined) or not (joined) no longer come into it.

This further limits what can be hidden in a puzzle, but the simplicity of the single rule means that I expect (as I write on 13 May 2021) to now work only with the new form. The biggest general restriction is that there must always be an even number of connections in a closed loop. It’s easy to see why. Every join must be between two numbers exactly 1 apart (considering 0 as 10 for the purpose of joining with 9). So joins alternate odd and even. So to get back to the same point in a closed loop there must be an even number of line segments involved else you’d have switched from odd to even or even to odd.

August 2021 update: I’m still only working with the reduced rule set but have only been making puzzles that have no horizontally or vertically adjacent pairs or identical numbers. So they can be viewed as puzzles with exactly the same rules as there always were, but where the second rule is just not needed. I prefer that approach over including pairs of same numbers that previously would have joined but now don’t, because it leaves the door open to doing more of the original puzzles, which I still like and which you can do more with.