Begriddled! A new kind of puzzle

Begriddled is a new kind of puzzle with two distinct flavours: absorbing and not quite as easy you might think, and more challenging logic.

The first two books are now available on Amazon:

Begriddled! A New Kind of Puzzle is a collection of 53 (plus some extras) regular Begriddled puzzles, many of which solve to reveal a further hidden puzzle.

These first books were supported by a successful Kickstarter campaign. Here’s the video for that: 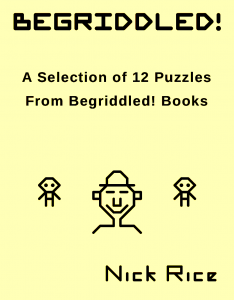 There are currently two flavours of Begriddled! puzzle, though I’m eager to expand that as soon as the first two books are a reality.

The simplest is “self working,” though some people find these are not quite as easy as they appear.

These puzzles have two rules:

There’s an example of one of these simple puzzles in the above video.

The other is the logic puzzle version, an example of which also appears in the video.

The numbers join in exactly the same way as in the simplest type, but this time you don’t get told the sequence. Instead you have to determine it by using an additional rule.

The rule in the video is that each set of joined numbers is no wider or taller than three numbers (or two line segments).

There’s a third type I’ve played with that I’m calling the Code Breaker.

The rules for joining the numbers are the same. But this time there’s no logic rule and you don’t get told the sequence.

You have to use your code breaking skills to reveal the hidden message.

If you find the logic puzzles straightforward, a Begriddled! code breaker can be relatively easy: You might assume it’s made up of simple letters, and you might be right.

But it can be fiendishly difficult: Although the message will be obvious with the right sequence, unpicking that sequence is much harder to do when other elements are confusingly thrown in, or unfamiliar forms of letters included.

I’m not doing anything with this one at the moment.

You probably noticed all the versions are essentially the same. The difference is in the different amounts of information you get, that make them radically different to solve.