Bible puzzles you can publish for free

If you compile a parish or similar magazine, I will provide you with free Bible puzzles like the examples below that you can publish in your magazine.

The best way to see how they work is to have a go at the examples on this page.

You can see the solution here.

I’ll provide you with the puzzles, and their solutions, as print-quality images that you can insert into your magazine just as you include other images.

Although you can use the examples on this page, the quality here is intended for the web. Feel free to print them on a home printer, but for high resolution versions, please contact via the form below.

I’ll provide two versions of each puzzle. In one you join 0 to 1 to 2 to 3, etc, as in the above example. In the other what you join to what is all mixed up, like with this next one. 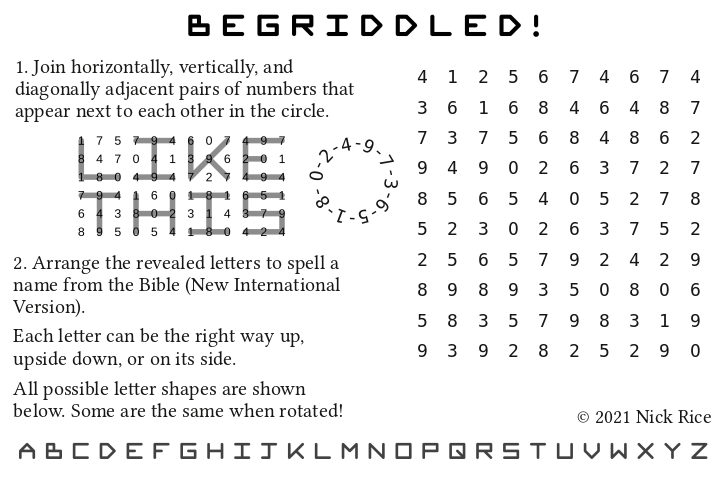 You can see the solution here.

You are free to include either version, depending on what your readers prefer, or even include two puzzles, each hiding a different name.

To make it easier on readers, you might introduce a puzzle with a clue of your own.

If you say the it hides the name of one of the disciples, and someone finds two P’s, an E, and a T, they are likely to realise what the name is going to be and so go looking for the missing letter and double check the P’s. On the other hand, if all they know is that it is a name in the Bible, mightn’t it be much more satisfying when they fully solve the puzzle?

If you would like print-quality versions of these and other similar Bible name puzzles for your magazine, or want more information, please contact me via the form below.

I’ve already completed quite a number of these puzzles, but if you have anything in particular you’d like hidden in a puzzle (appropriate for a church magazine, of course!) feel free to mention that in your message. If it’s something there’s a good chance other church magazines would also like, I’ll put it on my to do list – maybe even do it next!

The format of all the puzzles is the same.

Each consists of a 10 x 10 square grid of numbers, 100 in total. When you join the numbers according to the simple rule, hidden letters emerge. Each letter is three numbers wide and three numbers tall, and exactly the same shape as one of the letters if the alphabet shown at the bottom of the puzzle.

Once a reader has found the letters, their task is to form a name from the Bible using them. (I use the New International Version. Mostly it doesn’t make a difference, especially for well-known names. But there are plenty of instances where different versions use a different spelling for a name.)

But there’s a catch.

Each letter can be turned any way around: right way up, upside down, or rotated a quarter way round to the right or left to be on its side. And although the lines of the letters never touch, they can poke into each other.

The fact that the letters are so often rotated isn’t a big deal mostly. An A is clearly an A whichever way up it is. But is what looks like a C actually a C, or could it be a U? They look exactly the same. So too H’s and I’s, M’s and W’s, and N’s and Z’s.

(If your readers don’t find this enough of a challenge, I can provide a version where M’s and W’s look exactly like E’s, and/or J’s and L’s are the same. That was what I was going to offer initially, before deciding that this might be a bit too much of a challenge for many.)